The aroma of French toast baking in the morning is simply heavenly! My Berry French Toast recipe is the way I like mine – baked in the oven, then loaded with tons of fresh berries, maple whipped cream and maple syrup! I love making a large batch of fluffy maple whipped cream to add on top! If you don’t have maple syrup extract for the cream, a few tablespoons of syrup will work well, too. It’s the perfect way to start the day, especially on a weekend! And you can prepare this breakfast recipe the night before and bake it in the morning!

Watch my video recipe for step-by-step instructions for this delicious baked French toast! Want to receive new recipe updates? Make sure to subscribe to my emailing list and my YouTube channel and turn on notifications!

For this baked French toast recipe, I use a loaf of day-old French bread – it soaks up the custard mixture very well! The key to making great French toast is to make sure the bread is thoroughly soaked with custard. As the toast bakes in the oven, the custard will cook and transform the bread.

And don’t forget to put the ‘very berry’ into this berry French toast! Feel free to top off this dish with your favorite fruit! I love berries so I used a combination of raspberries, blueberries and strawberries. This breakfast recipe would also work great with fruit such as nectarines, peaches, and even mango!

I have to admit, I have a serious obsession with French toast. I love the warming aroma of cinnamon and caramelized sugar and the sweet flavor of the toast with maple syrup. It’s always been one of my all-time favorite breakfast recipe since early childhood! If my husband and I are out for breakfast or brunch, we always order a side of toast to finish off our meal!

Looking for more breakfast recipes? Check out some of these delicious ideas! 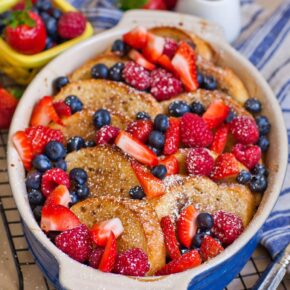